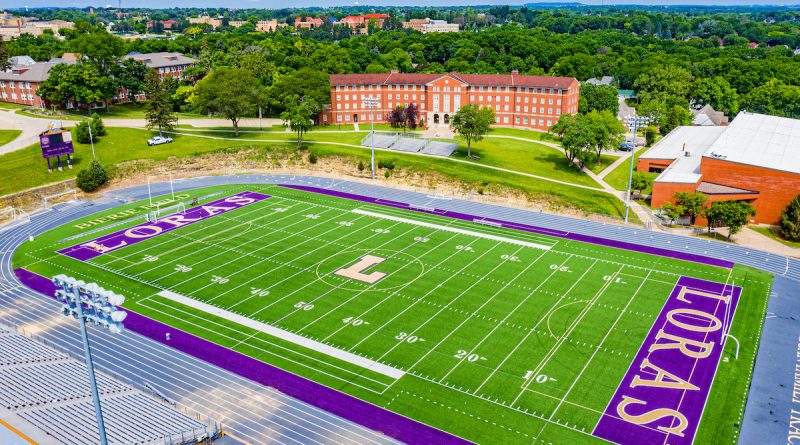 When Keane Field played host to Loras football games prior to 1940, a number of situations unique to that surface would regularly arise.

Built over a steam tunnel that stretched from Keane Hall to the dining hall, the playing surface fluctuated from rock hard during the summer and fall when a tackled player could be injured by the impact with the ground to overly soft in the winter as the steam turned it into a mushy field into which players’ feet could sink. In fact, referees were known to adjust the spot of the ball to provide a more favorable playing condition around the worst areas.

In 1939, Loras College President Monsignor Michael Martin turned his focus to updating campus facilities. With a keen personal interest in athletics, he pushed forward to install a new football field and track on campus. He targeted a ravine behind Science Hall (now Hennessy Hall) that was the site of an old horse barn and numerous tree stumps and rocks.

After navigating the area through the construction process, the new stadium was completed in October 1940 with a grandstand that accommodated 5,000 fans. For their initial football game on the surface,   the Duhawks defeated Upper Iowa, 26-6.

Since then, Rock Bowl Stadium has served as home for multiple Loras sports teams. From 1980 through 2004, Bob Bierie became the winningest football coach at Loras, going 144-106-5 with 85 of those wins at the Rock Bowl. The field at the stadium has been named in his honor.

In 2005, the stadium saw its first renovation, with a new Field Turf field, new track, new press box, paved construction plaza, retail space, hospitality suite and additional seating. The field and track were updated once more in 2019. The track was renamed “The Finnegan Family Track” in honor of Paul and Mary Finnegan, who donated $250,000 to the overall Rock Bowl renovation project, specifically for a brand new competition track surface.

Today, the Rock Bowl annually accommodates more than 10,000 fans, more than 500 student-athletes, and hosts more than 1,000 competitions. In addition, the stadium is home to the Loras All-Sports Camp and numerous Dubuque Wahlert Catholic sporting events.