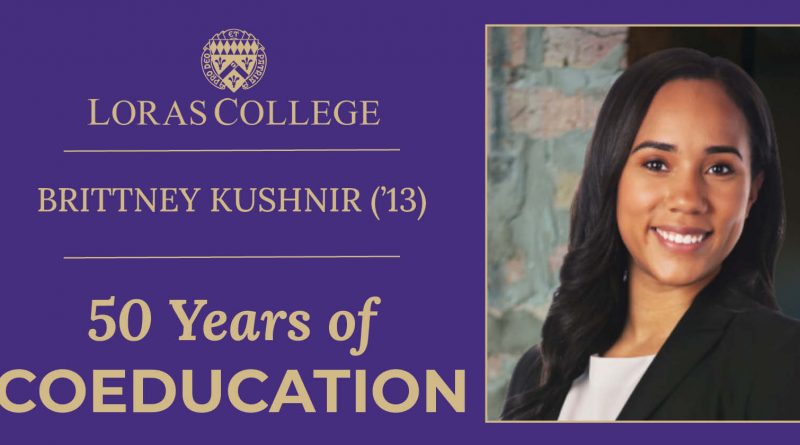 When Brittney (Cato) Kushnir (’13), JD, arrived on the Loras College campus for her first year, she had an established support network on the women’s basketball team, but still had moments where the transition from her home in Chicago felt too far away from Dubuque. Being both Black and Puerto Rican, many of the comforts she was used to were not available.

“It took some getting used to, but it speaks volumes about the Loras community to find other things that make up for the elements you are missing,” she said. “I found support in different ways. I became a resident assistant and found communities within Loras like the Black Student Union to broaden my experience.”

Now practicing business and commercial law in Chicago, Cato still speaks with students at her alma mater to share those experiences.

“I think it is important to give students of color the support they need in that journey. I know how I felt when I arrived at Loras and I want to let them know they are in the right place and there are people who are there to support them. Also, letting them know their concerns are valid, whether it is missing home of not finding their place, that they do fit in. I know first-year Brittney would have loved someone to talk to someone who was just in her shoes and could coach me through it. If I have the chance to talk to any student at Loras that needs the support, I am all for it,” she said.

Cato’s path to Loras came through two courts–basketball and law. Recruited to play basketball, she experienced an overnight visit that made her fall in love with the campus. By the end of the visit, she knew the team would be there for her. She also liked the idea of a more intimate learning environment coming from a small high school.

The summer before she came to Loras, she got her first taste of the legal profession at the state attorney’s office.

“My dad always used to joke that I would make a great lawyer. That internship was really interesting. Each summer after that, I did different internships testing out the legal profession,” she explained.

While she homed in on a career in law, Cato was a double major in English and Spanish. She credits her work in those classes for preparing her for her profession, particularly her experiences with Susan Stone, PhD, professor of English, and Kate McCarthy Gilmore, PhD, professor of Spanish.

“Dr. Stone is someone I still talk with regularly. The way she handled classes and books that could be culturally difficult in a way that made me feel comfortable talking to her made a big difference.The way she interacts with her students was significant to me. Both she and Dr. McCarthy-Gilmore were very open and easy to talk to. I had a comfort going to them and when I left their offices, I felt I received the attention I needed and had improved based on the interactions,” she recalled.

“I was well prepared for law school thanks to Loras thanks in no small part due to the work ethic that was instilled in me through my English and Spanish classes,” she explained. “Coming into law school, I had a humbleness that I think comes with the Loras experience. I knew I had a quality education and had the tools I needed. I had a silent confidence due to the down-to-earth approach that Loras takes.”

Cato would be asked to come back to speak to students multiple times, including to provide the keynote address for the 2018 Commencement.

“I still don’t have words for it. Writing my speech gave me a chance to reflect on my journey and where I wanted to go. Part of the speech was me talking to my younger self and what that Loras graduation meant. It was also a reminder to my current self that we are continually evolving. I am grateful for the reflection that opportunity provided me.”