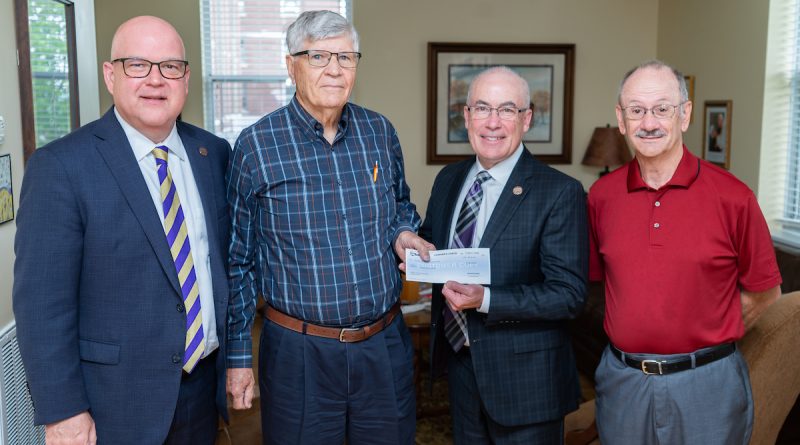 Loras College is pleased to report the receipt of a $2 million estate gift from Robert A. “Bob” Holtz. The contribution will be added to an endowed scholarship fund already established in Bob’s name. Given his longstanding generosity, Loras will also name its advancement suite, the Bob Holtz Advancement Suite.

Holtz, a lifelong Delaware County resident who farmed near Greeley, Iowa, passed away on May 18, 2020. He was 89.

“The Bob Holtz Advancement Suite on the second floor of Keane Hall will serve as a permanent testament to the generosity of a community leader who has helped over 60 students attend Loras College over the past 20-plus years,” said Michael H. Doyle, J.D. (’91), Vice President for Advancement and Treasurer at Loras.

The Holtz family has owned his farm for more than 100 years. In addition to farming, Holtz was a U.S. Army veteran and the founder of Holtz Construction. The company, which Holtz ran while continuing to farm, primarily built hog barns.

“While Bob never attended college, he felt strongly about the need for students from the area where he grew up and lived to have access to obtaining a college degree. He was a huge believer in the value of education,” Doyle said.

The Robert A. Holtz Award is primarily intended for students from Edgewood-Colesburg High School and West Delaware High School.

“Because of his generosity, students will continue to have opportunity to attend Loras College,” Doyle said. “As students walk by the sign outside of the advancement suite on their way to and from classes in Keane Hall, they will know that Bob was a charitable man who helped advance Loras College and give students access to a world class education.”

Established in 1839, Loras is Iowa’s oldest college or university and the second-old Catholic college or university west of the Mississippi River. Keane Hall, which was dedicated in 1914, serves as the main administration building at Loras and is also home to the Francis J. Noonan School of Business and the Loras Cancer Research in Exercise Science (CARES) Lab.