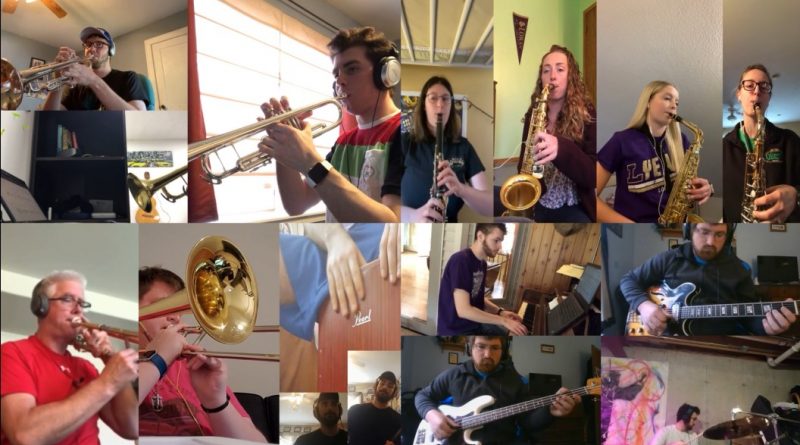 While the COVID-19 pandemic has directly impacted every class provided on campus this semester, the music program is one area that has been significantly affected. The need for social distancing, masks, and virtual learning keeps faculty and students safe, but they also provide hurdles for making music together.

For the jazz and wind ensembles, the limitations of space mean that the full complements of musicians cannot gather to play together in one room.

“While we continue to have rehearsals for the instrumental groups, they have certainly been changed to remain safe,” Glenn Pohland, D.M.A., associate professor of music, said. “I have taken the 45 person wind ensemble and divided it into three groups of 15. Each group is balanced as closely as possible, with players on every part of each group. Each group rehearses for approximately 35-40 minutes, and we are attempting to make some recordings that we can share with the Loras community.”

While this changes the overall dynamic of the learning experience, Dr. Pohland has found benefits to the smaller gatherings.

“One of the most interesting elements I have discovered is the availability of reduced instrumentation pieces that are suitable for the smaller ensembles. A project by the Wind Repertory Organization focused on asking composers to submit their works to be rescored for smaller ensembles. Several great wind band arrangers took on this challenge and have provided us with excellent transcriptions of outstanding pieces for wind band,” he said.

Dr. Pohland has also adjusted to take advantage of the online format to introduce outside professionals to share their experiences.

“One of the better things we have done is to invite professional musicians from across the country to join us in a zoom rehearsal and talk about their careers as professional playing musicians. We had an Air Force Master Sergeant who played in the Air Force Falconaires jazz group and a clarinet player with the New Mexico and Santa Fe symphonies so far this semester, and we are looking to have additional guests should we have more online rehearsals.”

For the vocal choirs, they have taken advantage of nice weather for most of the semester to perform outside. However, as the weather shifts through autumn to winter, they are rehearsing more indoors while incorporating virtual learning.

“The choirs are singing in small groups to facilitate distancing,” Jeremiah Cawley, D.M.A, director of choral and vocal activities, explained. “Everyone always sings while wearing masks. I also have a Zoom call set up for each rehearsal so that students in quarantine can follow along with the rehearsal. In addition to these in-person rehearsals, we have had a few all-online sessions where we have focused on vocal technique.”

For Dr. Cawley, this change has resulted in an adjusted focus in his rehearsals, from vocal techniques to a sense of community.

“This year, my focus has been much more on community, on allowing the students to get to know each other in new ways, and on creating a space where the students can come and have some of the pressure of the semester lifted, if only for half an hour. It’s not that we’re doing no vocal tech, literacy, or performance prep—just as I would be doing community building and trying to create a home on campus in a regular year—but this year, the priorities are very much reversed.”

Both Dr. Pohland and Dr. Cawley have seen their students make the most of the changes and adjust as best as they can.

For pianist Jacob Till (’22), while he misses the large gatherings, there are definite elements that he is benefitting from with the adjusted approach.

“It has been great to rehearse in small groups and sectionals in choir,” he said. “It has allowed for students to step up as leaders and share their personal strengths and talents with the group. Even though we are not getting to make music together in a single space, it has been fruitful for groups to get to work in smaller sections allowing for personal connections to be made between the ensemble’s members.”

Even though all in-person concerts and performances have been canceled, the choirs and ensembles are working on recording online content to share over the upcoming weeks. The jazz ensemble has already shared their performance of “Thank You for the Music,” with more to follow. The choirs are putting together a Christmas performance while hoping to have live-streaming events in the Spring.

“I have been impressed by the choir members’ attitudes,” Dr. Cawley said. “No one seems discouraged with how little we get to sing this semester, and everyone seems to be willing to enjoy the time we get together.”