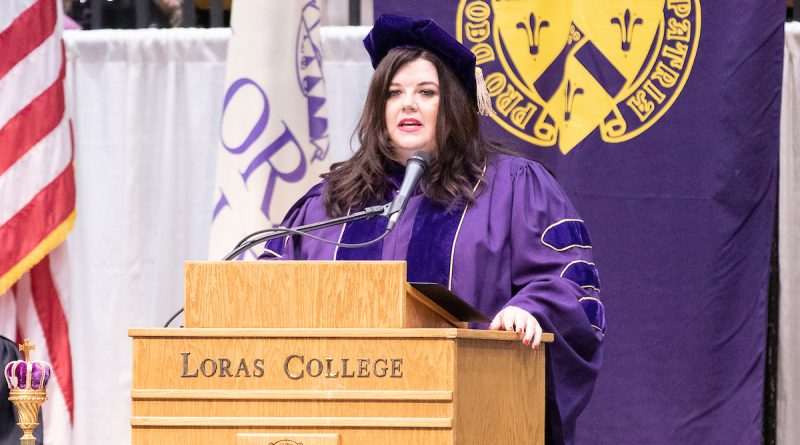 Wendy Schrunk (’07) gives annually to Loras College because of the help she received as a student.

“Let’s not pretend we have succeeded all by ourselves,” said Schrunk, a Chicago-based vice president in the asset management division of Goldman Sachs and president of the Loras National Alumni Board.

Schrunk, who graduated with a Bachelor of Arts degree in both finance and economics, was a Valder Award recipient during her years at Loras. She was a senior class officer, a resident assistant and was involved in many campus organizations.

“We didn’t pay for everything ourselves,” she said. “We had experiential learning because of generous contributions from alumni and we are those alumni now. We are the ones who are going to have to make experiential learning happen for today’s students. Donations of any size make a big difference.”

Like most Duhawks, Schrunk, who grew up in Le Mars, Iowa, credits her experiences at Loras with changing her life. “I came to Loras thinking I would be a religious studies major and some sort of business major. I immediately got involved in campus ministry and service trips because I felt really comfortable and at home there,” she said. “I kind of grew up working for my dad’s business and I knew business was something I was interested in. I took a microeconomics class my first semester because I knew I would need it for a business major and I absolutely fell in love with that discipline.”

After she graduated, Schrunk briefly moved back to her parents’ home in Le Mars. “I got a phone call from a recruiter at Goldman Sachs. I had given my resumé to a Duhawk friend’s aunt who works at Goldman,” Schrunk said. She landed a position with the company’s client services team. It enabled her to use the communications, finance and problem-solving skills she had developed in college.

A couple of months after beginning her career, Schrunk attended a Loras Network of Chicago event and then joined the organization before joining the National Alumni Board nine years ago. “I’ve done a lot of mentorship and coaching as part of NAB,” she said. “Loras has been my big philanthropic focus.”

Her commitment to Loras hasn’t wavered even in the past year during the pandemic because Loras has helped her cope with COVID-19. “Building communities is something I definitely learned at Loras,” Schrunk said. “You have this network of Loras people around you that are going to support you, give perspective and help you succeed. You have to do the same back for that community.”

For that reason, she has steadily increased her giving over the past decade and encourages as many of her Loras friends as she can to join her. “When I’m talking to them, I talk about what students are doing, what impacts the students are having, what challenges the College is having and tie it back to their time at Loras – remind them the success they are having in their job, the success they are having in their personal life is connected to their Loras experiences.”